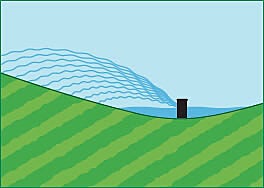 Meeting plant requirements and managing irrigation systems can be a difficult task under normal circumstances. When slope plantings are involved, applying water efficiently and effectively can be extremely challenging. Too little water and plants won't grow, too much water and you've got other problems.

Several tactics can be utilized to help you deal with these ups and downs. Following are ten design and product application tips for effective slope irrigation.

Tip #1: To reduce run-off, select an irrigation timer that controls your water applications.

Choose an irrigation timer with at least four start times per program. Determine how long a station can be on before run-off occurs. Divide the runtime necessary to meet the plant water requirements by this factor. If necessary, use each start time and reduce run-off that results from running valve stations too long. Even better, use an advanced controller with a feature like Cycle+Soak™. This will allow the total irrigation runtime to be simply split into usable cycles and the application of water in intervals that the soil will easily accept.

Tip #2: Use master valves and flow sensing equipment as an insurance policy.

It's important to use a master valve when irrigating slopes. Strategically locate the master valve to reduce the length of constantly pressurized mainline around the slope, and before the zone valves. A normally closed master valve will supply a mainline with water only when a cycle is initiated from the controller. This equipment will reduce the time that a damaged sprinkler, a broken pipe, or a defective valve will have to wash away the landscape.

Tip #3: Use reverse-flow valves to reduce problems associated with a worn diaphragm.

Tip #4: Use pressure compensating/regulating devices to get the best sprinkler coverage.

When used in accordance with the manufacturer's specifications, pressure-regulating modules like the Rain Bird PRS-Dial can be installed on valves to adjust the operating pressure of sprinkler heads downstream.

Built-in pressure compensating or regulating devices such as the 1800-PRS and 5000+PRS provide the best option since the optimum operating pressure is delivered directly to each sprinkler head. This will eliminate misting caused by high pressures, reduce water drift due to the wind, and give the water droplets the best chance of getting to where they are designed to go.

Tip #5: Adjust the distance between lateral lines to compensate for the slope.

On a 2:1 slope, a properly adjusted sprinkler will throw about 80 percent of its radius above the head and 120 percent of its radius below the head. This concept is difficult for many people to understand because, on the site plan of an irrigation project, slopes appear to cover less ground than they actually do, and the effect of the slope cannot be accurately portrayed.

Therefore, sprinklers can be spaced consistently along the lateral, but the distance between the bottom and middle laterals should be reduced and moved up toward the top of the slope to obtain head-to-head coverage and compensate for the true effects of the slope.

Tip #6: Space lateral lines across the slope rather than with the slope.

When installing the lateral lines, make sure they follow the contours of the slope. If lateral lines are incorrectly installed from the top to the bottom of a slope, the pressure differential resulting from the elevation change could create severely uneven pressures at each of the sprinkler nozzles. This will cause irregular water distribution. Additionally, the higher pressures at the bottom could shorten the longevity of the pipes and sprinklers.

As you add more sprinkler heads to a zone, the size of the delivery system components and infrastructure will increase. In this case, bigger also means that more water will be available to cause damage in the event that something on a system breaks. Consequently, large zones are not recommended unless other safeguards are included to circumvent potential problems.

Tailor the irrigation system to meet the specific water requirements of the slope areas. Separate zones to apply water to slope sections with considerably different plant material, as well as different exposures to sun, wind and other climatic influences. If you mix zones together, it will be hard to keep plant material healthy because one side of the slope will get too much or too little water.

Uniform water distribution is critical for effective slope irrigation. To achieve this, separate part-circle sprinklers from full-circle sprinklers, and then adjust the station run times. An easier method is to use nozzle sets that are specifically designed to create consistent precipitation rates, despite the various arcs and radii.

Using matched precipitation rate nozzles on the same valve system reduces the chance that your system will put down too much water with some heads and not enough from others. This will help to diminish the potential for severe soil erosion.

When used properly, a check valve will contain the unpressurized water in the lateral lines after the zone valve has completed its watering cycle (if the valve is located at a higher elevation). Without a check valve, the elevation difference from a valve above to the sprinklers below could generate enough internal pressure to force water out of the sprinkler.

A check valve will prevent the water that remains in the pipe from draining out of the sprinklers after the valve has shut off—thus reducing the chance of erosion of the landscape areas around or on the slope. Look for sprinklers that have built-in check valves. This eliminates the need for a separately installed check valve under each sprinkler.

Because many slopes are planted with ground cover instead of turf, consider installing highly efficient XFS-CV Check Valve Dripline which offers controlled release watering to help eliminate runoff and encourage healthy root growth. Not only will the landscape dripline improve the visual impact of the site, it isn't visible, and may help cut down on vandalism.

Effective slope irrigation is a mixture of good upfront planning, proper installation, and a solid maintenance technique. If all three are done properly, many emotional, financial, and physical problems can be avoided—and a healthy, aesthetically pleasing slope planting will be the result.