The 2021 U.S. Women’s Open was held at The Olympic Club in San Francisco this past weekend, where champion Yuka Saso became the youngest player (tied with Inbee Park) to win the tournament.

But Yuka Saso wasn’t the only one setting records. The tournament saw more women than ever before volunteer as part of the grounds crew. Twenty-nine women made up nearly half of the crew as part of a campaign devised by Olympic Club director of golf maintenance Troy Flanagan to bring more women in turf to this professional tournament. Most tournaments see merely a handful of women involved on the course, and Troy was determined to change things at The Olympic Club.

After Bayer launched its Women in Golf professional development event in 2019, Troy was inspired to develop an educational program tied in with the U.S. Women’s Open tournament prep. He approached Rain Bird’s Stuart Hackwell, Director of the golf strategic business unit, with the idea at an industry show in 2020, and Stuart was instantly on board. Rain Bird is dedicated to creating the best experiences at golf courses around the world and also cares deeply about diversity, personal development, and continuous improvement. The company saw this opportunity as an excellent way to live their values. Rain Bird agreed to finance the flight costs for the women volunteering at the Open to make it even more accessible. 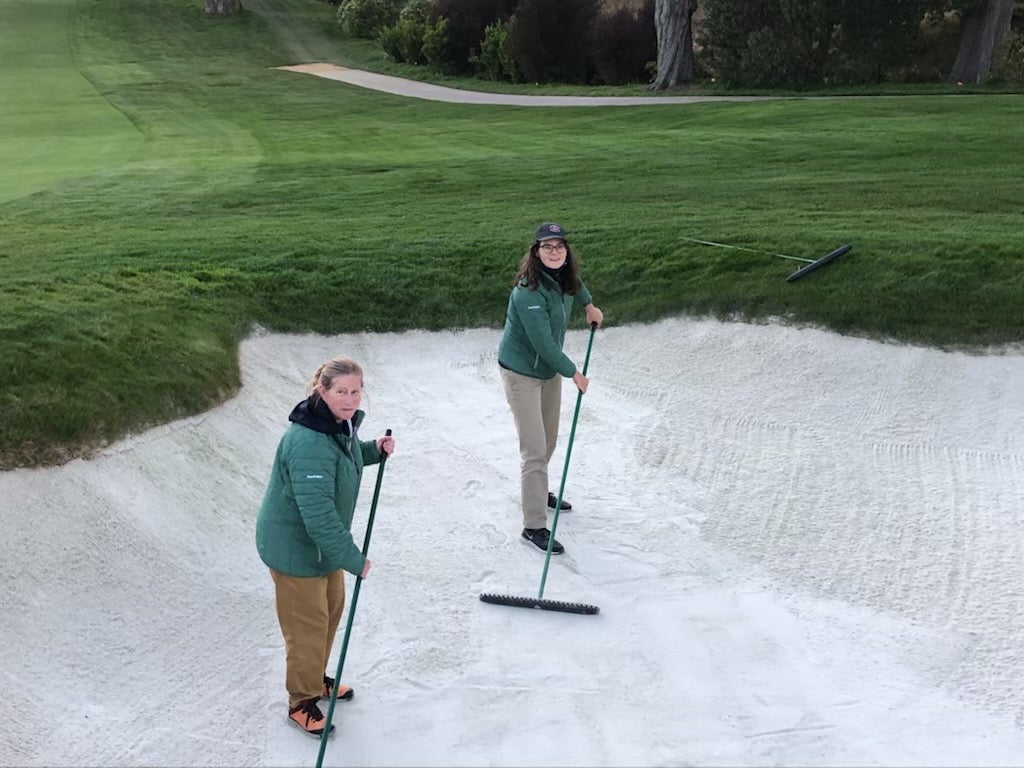 The week of the tournament saw women from around the country descend on The Olympic Club. In between preparing the course for the Open, all the volunteers took professional development courses, including one called “Leading While Female.” They also had ample opportunities for networking and developing friendships with others in the industry.

The response to the experience was phenomenal. Volunteers took to Twitter after the event, sharing their excitement and thanks. Sun Roesslein, @sportsturfsun, said, “Nearly impossible to summarize this past week. It was fun, inspiring, motivating, fun, exhausting, exciting, fun, amazing, etc… The biggest THANK YOU to @troyturf @GardKimberly and everyone who made this happen! More to come after some sleep! #USWOWomensTurfTeam.”

Tami Jones, @jonet059, also shared her thoughts: “I am so thankful, @troyturf and @gardkimberly experience of a lifetime. stimulating, exhilarating, inspiring, enthusiastic, blessed and sisterhood. Still doesn't due it justice. Thank you all for being yourselves!”

Responses to the Tweets are filled with other volunteers chiming in, also thankful and happy for both the experience they had and the connections they made. Plus, they can’t wait for more. Sally Jones, @sallym321, tweeted at Pebble Beach, the host of the 2023 U.S. Women’s Open, “The grass ceiling has been broken and there's no where to go except up!  Bubba @PebbleBeachGolf, we are coming for you.”

Rain Bird is thrilled to have been able to help this group of women travel to and participate in volunteering with the turf team, and we’re humbled by their responses. We look forward to seeing even more women volunteering at the next Open and beyond!